Before I got into reverse engineering, executables always seemed like black magic to me. I always wondered how stuff worked under the hood, and how binary code is represented inside .exe files, and how hard it is to modify this ‘compiled code’ without access to the original source code.

But one of the main intimidating hurdles always seemed to be the assembly language, it’s the thing that scares most people away from trying to learn about this field.

That’s the main reason why I thought of writing this straight-to-the-point article that only contains the essential stuff that you encounter the most when reversing, albeit missing crucial details for the sake of brevity, and assumes the reader has a reflex of finding answers online, looking up definitions, and more importantly, coming up with examples/ideas/projects to practice on.

The goal is to hopefully guide an aspiring reverse engineer and arouse motivation towards learning more about this seemingly elusive passion.

Note: This article assumes the reader has elementary knowledge regarding the hexadecimal numeral system, as well as the C programming language, and is based on a 32-bit Windows executable case study - results might differ across different OSes/architectures.

After writing code using a compiled language, a compilation takes place , in order to generate the output binary file (an example of such is an .exe file).

Compilers are sophisticated programs which do this task. They make sure the syntax of your code is correct, before compiling and optimizing the resulting machine code by minimizing its size and improving its performance, whenever applicable.

As we were saying, the resulting output file contains binary code, which can only be ‘understood’ by a CPU, it’s essentially a succession of varying-length instructions to be executed in order - here’s what some of them look like:

These instructions are predominantly arithmetical, and they manipulate CPU registers/flags as well as volatile memory, as they’re executed.

A CPU register is almost like a temporary integer variable - there’s a small fixed number of them, and they exist because they’re quick to access, unlike memory-based variables, and they help the CPU keep track of its data (results, operands, counts, etc.) during execution.

It’s important to note the presence of a special register called the FLAGS register (EFLAGS on 32-bit), which houses a bunch of flags (boolean indicators), which hold information about the state of the CPU, which include details about the last arithmetic operation (zero: ZF, overflow: OF, parity: PF, sign: SF, etc.).

CPU registers visualized while debugging a 32-bit process on x64dbg, a debugging tool.

Some of these registers can also be spotted on the assembly excerpt mentioned previously, namely: EAX, ESP (stack pointer) and EBP (base pointer).

As the CPU executes stuff, it needs to access and interact with memory, that’s when the role of the stack and the heap comes.

These are (without getting into too much detail) the 2 main ways of ‘keeping track of variable data’ during the execution of a program:

The simpler and faster of the two - it’s a linear contiguous LIFO (last in = first out) data structure with a push/pop mechanism, it serves to remember function-scoped variables, arguments, and keeps track of calls (ever heard of a stack trace?)

The heap, however, is pretty unordered, and is for more complicated data structures, it’s typically used for dynamic allocations, where the size of the buffer isn’t initially known, and/or if it’s too big, and/or needs to be modified later.

As I’ve mentioned earlier, assembly instructions have a varying ‘byte-size’, and a varying number of arguments.

Arguments can also be either immediate (‘hardcoded’), or they can be registers, depending on the instruction:

Let’s quickly run through a very small set of some of the common ones we’ll get to see - feel free to do your own research for more detail:

Note: You might notice the words ‘equal’ and ‘zero’ being used interchangeably in x86 terminology - that’s because comparison instructions internally perform a subtraction, which means if the 2 operands are equal, ZF is set.

Now that we have a rough idea of the main elements used during the execution of a program, let’s get familiarized with the patterns of instructions that you can encounter reverse engineering your average everyday 32-bit PE binary.

A function prologue is some initial code embedded in the beginning of most functions, it serves to set up a new stack frame for said function.

It typically looks like this (X being a number):

The epilogue is simply the opposite of the prologue - it undoes its steps to restore the stack frame of the caller function, before it returns to it:

Now at this point, you might be wondering - how do functions talk to each other? How exactly do you send/access arguments when calling a function, and how do you receive the return value? That’s precisely why we have calling conventions.

A calling convention is basically a protocol used to communicate with functions, there’s a few variations of them, but they share the same principle.

We will be looking at the __cdecl (C declaration) convention, which is the standard one when compiling C code.

In __cdecl (32-bit), function arguments are passed on the stack (pushed in reverse order), while the return value is returned in the EAX register (assuming it’s not a float).

Assuming func() simply does an addition on the arguments and returns the result, it would probably look like this:

Now if you’ve been paying attention and you’re still confused, you might be asking yourself one of these 2 questions:

1) Why do we have to adjust EBP by 8 to get to the first argument?

2) What happened to the prologue and epilogue, why are they seemingly ‘truncated’?

To demo the flow control assembly instructions, I’d like to add one more example to show how an if condition was compiled to assembly.

Assume we have the following function:

After compiling it, here’s the disassembly that I got with the help of IDA:

Give yourself a minute and try to make sense of this disassembly output (for simplicity’s sake, I’ve changed the real addresses and made the function start from 10000000 instead).

In case you’re wondering about the add esp, 4 part, it’s simply there to adjust ESP back to its initial value (same effect as a pop, except without modifying any register), since we had to push the printf string argument.

Now let’s move on and talk about how data is stored (integers and strings especially).

Endianness is the order of the sequence of bytes representing a value in computer memory.

For reference, x86 family processors (the ones on pretty much any computer you can find) always use little-endian.

To give you a live example of this concept, I’ve compiled a Visual Studio C++ console app, where I declared an int variable with the value 1337 assigned to it, then I printed the variable’s address using printf(), on the main function.

Then I ran the program attached to the debugger in order to check the printed variable’s address on the memory hex view, and here’s the result I obtained: 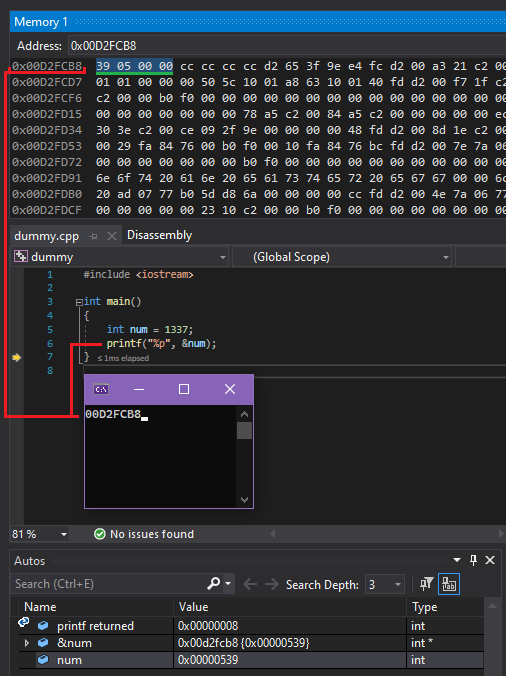 To elaborate more on this - int variables are 4 bytes long (32 bits) (in case you didn’t know), so this means that if the variable starts from the address D2FCB8 it would end right before D2FCBC (+4).

To go from human readable value to memory bytes, follow these steps:

This part is interesting yet relatively simple. What you should know here is that integer signing (positive/negative) is typically done on computers with the help of a concept called two’s complement.

The gist of it is that the lowest/first half of an integer is reserved for positive numbers, while the highest/last half is for negative numbers, here’s what this looks like in hex, for a 32-bit signed int (highlighted = hex, in parenthesis = decimal):

If you’ve noticed, we’re always ascending in value. Whether we go up in hex or decimal. And that’s the crucial point of this concept - arithmetical operation do not have to do anything special to handle signing, they can simply treat all values as unsigned/positive, and the result would still be interpreted correctly (as long as we don’t go beyond INT_MAX or INT_MIN), and that’s because integers will also ‘rollover’ on overflow/underflow by design, kinda like an analog odometer. 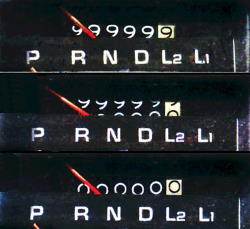 Protip: The Windows calculator is a very helpful tool - you can set it to programmer mode and set the size to DWORD (4 bytes), then enter negative decimal values and visualize them in hex and binary, and have fun performing operations on them. 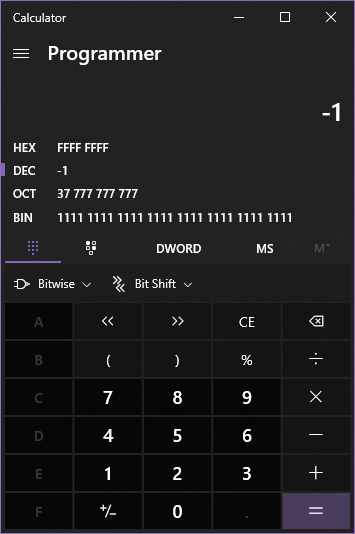 In C, strings are stored as char arrays, therefore, there’s nothing special to note here, except for something called null termination.

If you ever wondered how strlen() is able to know the size of a string, it’s very simple - strings have a character that indicates their end, and that’s the null byte/character - 00 or '\0'.

If you declare a string constant in C code, and hover over it in Visual Studio, for instance, it will tell you the size of the generated array, and as you can see, for this reason, it’s one element more than the ‘visible’ string size.

Note: The endianness concept is not applicable on arrays, only on single variables. Therefore, the order of characters in memory would be normal here - low to high.

Now that you know all of this, you’re likely able to start making sense of some machine code, and emulate a CPU with your brain, to some extent, so to speak.

Let’s take the print_equal() example, but let’s only focus on the printf() call instructions this time.

You might be wondering to yourself - wait a second, if these are the same instructions, then why are their bytes different?

That’s because, call (and jmp) instructions (usually) take an offset (relative address) as an argument, not an absolute address.

An offset is basically the difference between the current location, and the destination, which also means that it can be either negative or positive.

As you can see, the opcode of a call instruction that takes a 32-bit offset, is E8, and is followed by said offset - which makes the full instruction: E8 XX XX XX XX.

Pull out your calculator, and calculate the difference between the offset of both instructions (don’t forget the endianness).

Another small detail that we should add, is the fact that the CPU only executes an instruction after fully ‘reading’ it, which means that by the time the CPU starts ‘executing’, EIP (the instruction pointer) is already pointing at the next instruction to be executed.

That’s why these offsets are actually accounting for this behaviour, which means that in order to get the real address of the target function, we have to also add the size of the call instruction: 5.

Now let’s apply all these steps in order to resolve printf()’s address from the first instruction on the example:

The exact same principle applies to the jmp instruction:

The only difference in this example is that EB XX is a short version jmp instruction - which means it only takes an 8-bit (1 byte) offset.

That’s it! You should now have enough information (and hopefully, motivation) to start your journey reverse engineering executables.

Start by writing dummy C code, compiling it, and debugging it while single-stepping through the disassembly instructions (Visual Studio allows you to do this, by the way).

Compiler Explorer is also an extremely helpful website which compiles C code to assembly for you in real time using multiple compilers (select the x86 msvc compiler for Windows 32-bit).

After that, you can try your luck with closed-source native binaries, by the help of disassemblers such as Ghidra and IDA, and debuggers such as x64dbg.

Note: If you’ve noticed inaccurate information, or room for improvement regarding this article, and would like to improve it, feel free to submit a pull request on GitHub.